I originally wrote this post last Sunday, February 28, in the morning. That afternoon, I watched Canada’s hockey team win the Gold medal at the Olympics in a nail-biting match against the Americans. Seconds after the game ended, I headed downtown to check out what was going on.

Something magical happened that afternoon. Granville and Robson streets were a river of red and white, cheering, hooting, celebrating fans. It was the last day of the Olympics, and Canada had won more Gold Medals than any other host nation in the history of the Olympics. That, topped with the Gold in Hockey, well, our national pride erupted in a way that I have never experienced.

It was absolutely amazing to be part of that energy. I must have high-fived about a thousand total strangers–we were bound together simply by our shared national pride.

That was Sunday, and I had scheduled this post for Monday. Needless to say, I didn’t post it. But here it is, only lightly edited since I originally wrote it.

As I write this, I am getting ready to go watch the final gold-medal hockey game between Canada and the US (go, Canada!). Today is the final day of the Olympics, and what a long road it’s been.

I remember being very for the Olympics when we were in the running to host them. I voted yes in the referendum. I believed that the Olympics would be good for my city: it would bring big business and lots of traffic in the form of visitors. I was also aware of the Cultural Olympiad: a year-long celebration of the arts that is part of every Olympics.

In the ensuing years, and especially over the last year, my enthusiasm for the Olympics has waned. Cost overrun after cost overrun has thrown our province into a state of serious debt. Housing prices rose to a point where it was impossible for me to ever dream about owning a house. And then came a recession–something which no one could have predicted seven years ago–which has lead to serious cuts to the arts sector.

I got two Cultural Olympiad contracts: one already took place in January, The Edward Curtis Project at Presentation House, and the other takes place next month at the Roundhouse: Mascall Dance’s The White Spider. Because these two shows were being presented by the Cultural Olympiad, every media release and thing I sent out to the media had to be vetted past the Cultural Olympiad committee and staff. Which added an extra, unaccustomed and time-consuming step to my already busy schedule. 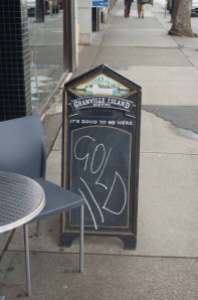 Don’t get me wrong, I don’t want to wallow in the negative. I have loved watching my country compete in the games, and it has been refreshing and exciting to see the outpouring of national pride during these last 16 days. It is an outpouring I have never witnessed before. Canada has done very well at this Olympics, winning more gold medals than any other host country in the history of the games.

While I doubt that we will actually break even at the end of the games, I do see that all of the TV coverage and people visiting are sowing the seeds for future business and tourism. And who knows what that number will be.

Closer to home, February of 2010 has been my worst month of business since I started in December of 2007. Other than the books I sold online and via Biz Books this month, my income was $0. A quick conversation with some of my friends led me to believe I was not alone: Biz Books, in fact, also suffered its worst month of business in its 14-year history.

I’m not too concerned, as I put money aside exactly for this worst-case scenario, and the projections for the next three months are excellent. I just think that this is more than a coincidence.

It has been difficult to get media coverage this month for the shows I have coming up in March. Over and over again, I heard from the media, “If it’s not to do with the Olympics, talk to us on March 1.”

So… great for National Pride–Go, Canada!–but lousy for business. I’d love to hear from you if you live in Vancouver and run a business. How did the Olympics affect you?