This week saw a major update to the Instagram app. It was mostly cosmetic, though, there were very few changes that took place in the app itself.

Rather, Instagram updated its logo (which has not been met with much enthusiasm from the interwebz) and it’s interface, unveiling a cleaner, more minimalistic design. I rather like it, but agree the logo looks retro.

Supposedly, at the same time as they were rolling out the update, they were also testing their new algorithm in some markets. I have not seen this in my update yet, but some folks on line were complaining that their timelines had suddenly gone “non-chronological.” 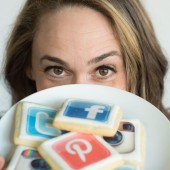